ROOSEVELT FIFTY FOUR kicks off TIFF with “Mr. Witch Doktor” ARMAND VAN HELDEN in his most intimate and interactive venue yet!

COME SEE ONE OF THE PIONEERS OF HOUSE MUSIC LIVE. THIS IS AN EVENT NOT TO BE MISSED AND AN EXTREMELY RARE PERFORMANCE. 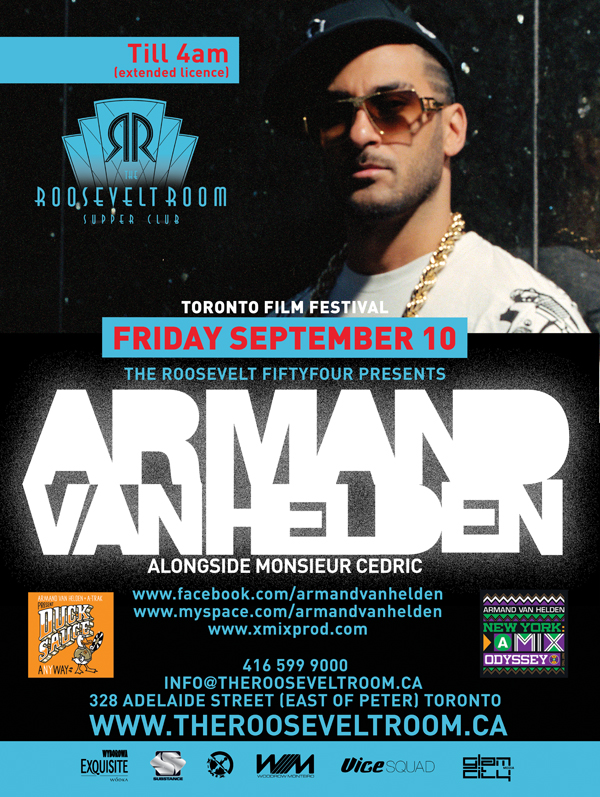 There is no greater pleasure in cinema than watching great actors at work. Director John Curran (We Don’t Live Here Anymore) once again guides top actors to terrific performances in Stone. Delving into the mind of a deranged arsonist and an off-kilter parole officer, this taut thriller pits two generations of Hollywood’s most compelling dramatic actors against each other in a battle of blackmail and emotional manipulation.

Jack Mabry (Robert De Niro) is an unforgiving man, hardened after years of working as a parole officer. Nearing retirement, he takes one last case. The man in question, Gerald “Stone” Creeson (Edward Norton), is a convicted arsonist up for his latest parole hearing, but full of his usual bravado and twisted logic. A decade earlier, he and his cousin broke into his grandparent’s home, murdered them and burned their house to the ground. Now, Stone insists that his beautiful but not-quite-there wife, Lucetta (Milla Jovovich), meet with Jack. Against his better judgment, Jack meets her one whisky-fuelled evening, and it soon becomes apparent that no one involved has pure intentions.

De Niro is riveting endowing his character with a flawed psyche that skews his decision-making and distorts his perspective. Distant and threatening to his own wife (Frances Conroy), he is an aging thug who suddenly finds a spark of light in his life. Norton plays Stone as a fascinating degenerate, kin to his early role in Primal Fear. And Jovovich curdles her character’s sweetness with a dark edge.

With all this acting prowess on display, Curran could be excused for sitting back and letting the performances do all the work. But he pays as close attention to the screenplay (he recently co-wrote Michael Winterbottom’s The Killer Inside Me), and, most impressively, to the sound design. Even with its dangerous and sometimes seamy characters, this is a film of insight, grace and precision.